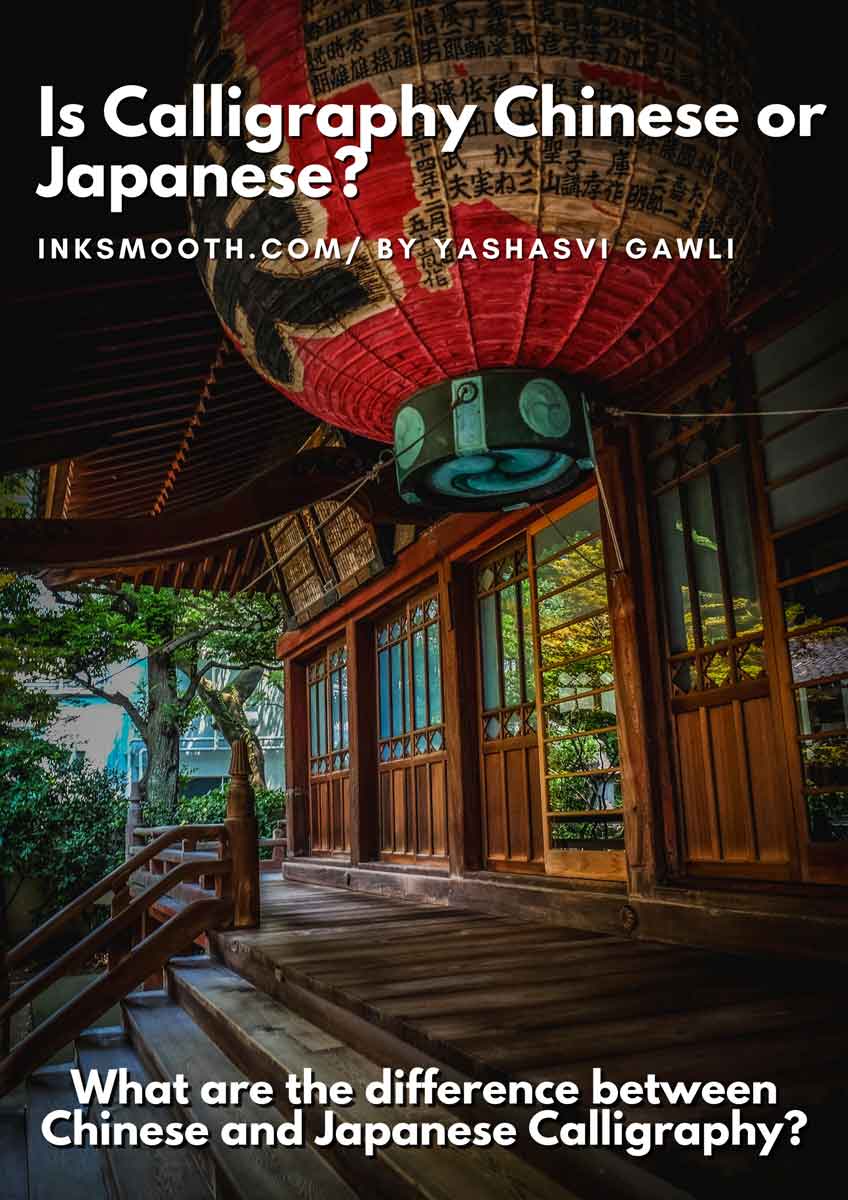 Is Calligraphy Chinese or Japanese? The Origin of Calligraphy- InkSmooth

Is Calligraphy Chinese or Japanese?  Calligraphy originated in ancient China in the 206 BCE – 220 CE. And Japanese calligraphy developed out of Chinese writing and symbols around 2000 years ago. So we can consider calligraphy is Chinese.

Is Calligraphy Chinese or Japanese?

Calligraphy was firstly invented in China at 206 BCE – 220 CE. Then it was introduced to Japanese people in the 6th century.

In the ancient Japanese culture, calligraphy is the art of writing by hand to create letters or symbols using a brush dipped in ink.

Since then, a unique style and technique has been formed in Japan. and it has been practiced by nobility, samurai, and ordinary peoples since then.

Calligraphy is also known as Shodo, which translates to “the way of writing.” The shodo tradition of calligraphy was first brought to Japan by China in the 6th century A.D.

The Chinese and Japanese languages are very different from each other. Therefore Japanese people had to adapt these characters to their already developed spoken language.

Where did Calligraphy Originate?

And since then it continues its journey from one country to another country. And get evolved more and more.

It travels all around the globe and maintains its originality core value. Because of this evolution we get to see different fonts and scripts of calligraphy, as well as it’s core value to different cultures.

We get to see gothic script, italian, Roman and late Roman scripts as well as the impact of calligraphy to different religions.

It spread all across the world and managed to survive till now. First let’s talk about word calligraphy itself.

The word calligraphy comes from the combination of two Greek words kallos and Graphein. Kallos means beauty and Graphein means write. And they both make together beautiful writing.

But this journey was not as easy as it looks. Firstly they evolved as kalligraphos which means a person who writes beautifully in the Greek language.

Then it even evolved and made words kalligraphia. And then finally in the early 17th century we got to see word calligraphy. And since then we are using it very commonly.

And till this date calligraphy gets very famous and spread all across the world. And later Edward Johnston is considered as the father of modern calligraphy.

They studied published copies of manuscripts by architect William Harrison Cowlishaw. He was introduced to William Lethaby in the 1898 (Principal of the Central School of Arts and Crafts.) Who advised him to study manuscripts at British Museum.

So we can say the founder of modern calligraphy is Edward Johnston.

In all this great movement regarding calligraphy, calligraphy impacted and inspired a lot of culture and religions.

Like in the year 644 to 656. When the verbs of muslim holy book quaan gets written they want to write it more beautifully. Because they consider it to be the word of god.

They had to preserve it as it is, therefore they are very strict about their calligraphy rules and regulations. Calligraphy inspired the Arabic culture a lot, and is important in their culture.

We wrote separate articles about these. You can check them out if you want to-

8 Reasons Why is Arabic Calligraphy Beautiful?

6 Reasons Why is Arabic Calligraphy Not Easy?

Similarly calligraphy gets evolved and becomes more and more involved in different cultures. And this is pretty much the history of calligraphy and its journey in short.

It all started from China in 206 BCE, then it spread to Japan and all different counties in the world. Since then it has managed to survive many many centuries. And it is a very mind-blowing thing.

Is Chinese and Japanese Calligraphy the Same?

We can clearly see and tell the difference between Chinese and Japanese alphabets and writings.

Many people does not know that Japan is the first country where unreadable calligraphy is created. When calligraphy itself cannot be read, it might be get considered as the abstract painting.

But in Japan from hundreds of years ago, unreadable Shodo is still widely recognized as calligraphy and not painting, in particular in Zen art.

Many Chinese people can might say that “it is meaningless to write something unreadable. It is not calligraphy because it is in incomplete Chinese characters.”

On the other hand, in Japan the unreadable Shodo is not only within the category of calligraphy, but also highly valued for its artistic achievement and representation of superior spirituality.

Following is an example of Japanese shodo calligraphy.

So in simple words Chinese calligraphy was first invented and based upon its characteristics japanese calligraphy were invented. It is called shodo and is known for its category of calligraphy, and artistic value. But they both are different and not at all identical.

It may look a little similar but it has some differences. And that brings us to What are the difference between Chinese and Japanese Calligraphy?

So let’s see them. In the section below.

What are the difference between Chinese and Japanese Calligraphy?

There are few differences between Chinese and Japanese Calligraphy. Let’s see them one by one.

Difference between Chinese and Japanese Calligraphy-

1. Difference between Meaning of both calligraphy.

Some meanings are different between Chinese and Japanese words. This is particularly true in compound words. As example, daijoubu (大丈夫) literally means great husband, but it means alright in Japanese languages. There is no such meaning in Chinese languages.

So we can consider this as a difference between those. Some words have different meanings in both of the languages.

This causes the “aesthetic” balance of the characters to be different. The most frequent is the of ta (田) in which the middle horizontal stroke is drawn first before the middle critical stroke in Chinese.

And in Japanese it is drawn in the reverse order. This order difference makes the Chinese character taller in appearance compared to the Japanese version.

3. Difference Between Purpose of Doing.

Chinese calligraphy was done for deep meditation. On the other hand, Japanese calligraphy is characterized as lyrical. It is written for writing beautiful words as sentences or words.

Chinese calligraphy was often written to express ourselves or themself as individuals. Because it gets written for meditation. And not for writing.

On the other hand, Japanese calligraphers try to write to show moderate expression.

4.  Difference Between How the brush is held

The Chinese brush is held in the little finger (pinky finger ). Nearest to the brush head in a vertical position.

The Japanese hold the brush more like a pen without resting the wrist on the table. The angle of the brush head is slightly different and it gives the characters a different appearance because of the angle of brushstrokes.

5. Difference Between structure of words.

The 5th difference between those is the structure of words. Chinese calligraphy has a strong and solid structure.

On the other hand, Japanese calligraphy is more flexible and decorative. The word has flexibility to it.

Conclusion- Is calligraphy Chinese or Japanese?

So in conclusion we can say calligraphy originated in china. And since then it has managed to spread all across the world. And survive till now.

When Chinese calligraphy was invented in 206 BCE, it came to Japan in the 6th century. Then from it’s characteristics Japanese people invented shodo calligraphy.

Which is unreadable but still considered a category of calligraphy because of it’s high artistic value.

Calligraphy is Chinese and then comes to Japan and gets developed as Japanese calligraphy. But they both are not the same at all. There are differences between those two. And from this article we mention those differences to you.

They may look a little similar sometimes but are actually different from each other. We even showed the differences between those languages and their writings. And this may help you to better understand the difference between them.

Lastly, calligraphy was first invented in Chinese and therefore it is Chinese and not Japanese.