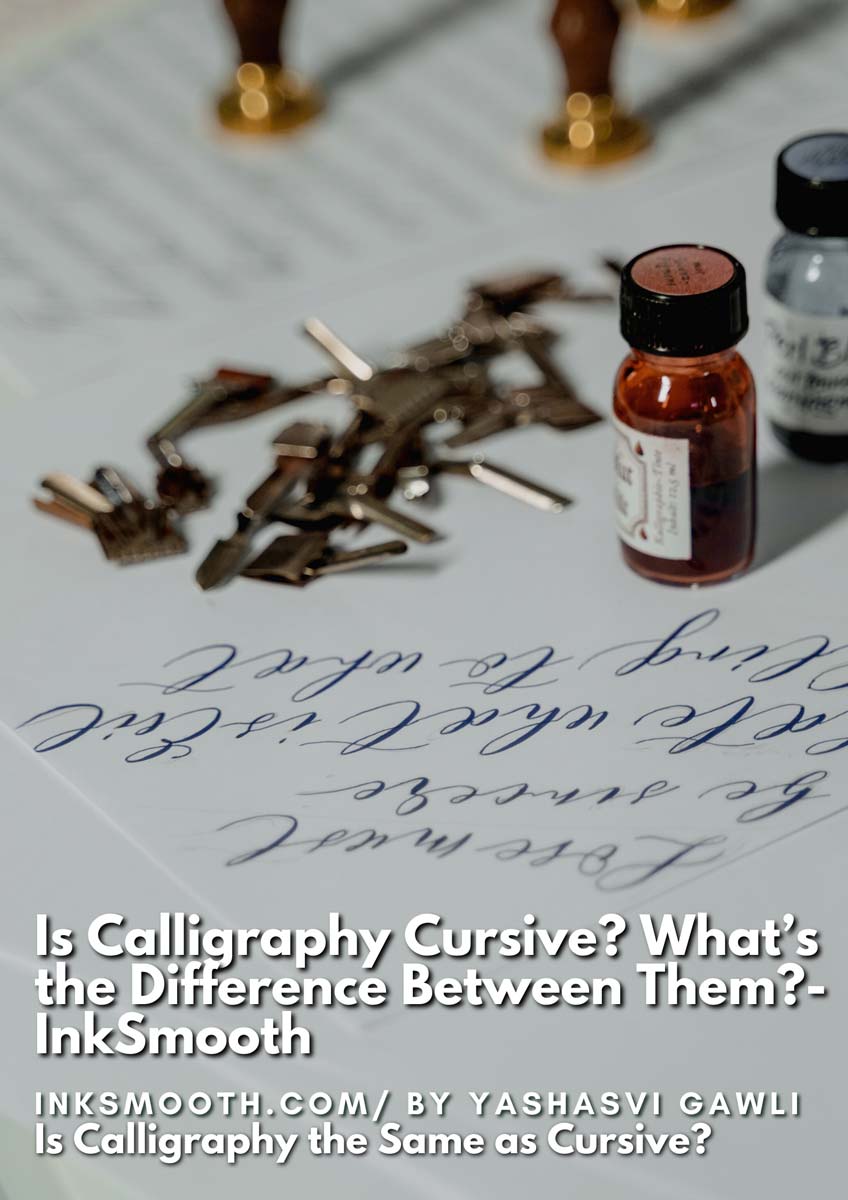 Calligraphy vs Cursive: What’s the Difference Between Them?-InkSmooth

There are many people who are confused. Is calligraphy the same as cursive? Is calligraphy cursive? Are they both the same or have differences? Is cursive a form of calligraphy? Cursive vs Calligraphy: What’s the Difference? Let’s discuss it from this article of InkSmooth.

Is calligraphy cursive? Calligraphy is not the same as cursive. Calligraphy and cursive both are different from each other. Calligraphy means art of beautiful writing. It focuses on the beautiful presentation of letters. And in cursive the letters are joined together and it is written without lifting the hand. Cursive focus on faster writing. Therefore they are not the same.

Read further for more in depth answers. And what are the main differences between these.

On the other hand, cursive is mainly developed for writing faster. For example writing in school, taking notes, etc. Cursive’s main motive is to give writers the ability to write faster and in less time. And therefore it is used for these days.

Nowadays cursive is mostly used for writing in schools. The reason behind this is very simple, it helps students to write faster while taking notes. And it gets taught in classes so everyone can understand and read it. That’s it.

Cursive helps people to write faster and save time. There are a few strict rules in cursive that everyone has to follow. You can not lift the pen from the paper while writing cursive. Also cursive is just the name of one script. And calligraphy is an art. There are many scripts that come under calligraphy. For example gothic, italic, etc.

So cursive is a script similar to gothic and italic. And calligraphy is a whole segment of the art field, it comes under fine arts. And there are a lot of scripts included in calligraphy.

But cursive didn’t come under calligraphy, it is a different type of script. Because as we said earlier calligraphy mainly focuses on the beautiful presentation of letters. And it helps us to present text beautifully. On the other hand, the main motive of cursive is writing faster.

In most English speaking countries the Cursive style of writing is the most dominant kind. That is because the English cursive (the first cursive font) was established during colonial times because it was fast to write.

During that time writing something fast became very important, because printing was not invented at that time. And not only in the church but also a lot of Nobel men were not able to write and used writing as a main means of communication.

But in Germany and other European countries, older types of fonts and scripts are still very popular in calligraphy. like the old gothic and blackletter scripts.

To understand the exact difference and be more clear read the blue highlighted paragraph below.

Is Calligraphy the Same as Cursive?

Let me show you the difference.- Now for a moment keep everything aside. And see both calligraphy and cursive as a term(word). Now the term calligraphy means beautiful writing (the word calligraphy actually translates the same “beautiful writing”). And its motive is to write beautiful letters. In this way our writing became more attractive and presentable (therefore a lot of people use it in books).

Now the motive of cursive is to write faster. Calligraphy is very time consuming to write and when printing was not invented, it’s very difficult to mass produce the content for people. So therefore the cursive was invented.

That’s the simple logic behind it.

So initially they are not the same. But cursive calligraphy does exist. It exists because people are very used to cursive. And it’s a very beautiful and unique kind of script. Therefore people developed the calligraphy version of cursive. But they are different. We can not consider normal cursive in calligraphy.

Is Cursive a Form of Calligraphy?

There is a cursive script available in calligraphy. After the invention of cursive people became very used to cursive. And it’s a very beautiful and unique kind of  script as well as very simple to learn, therefore people made a cursive script/ form of calligraphy.

It’s very similar to doing any kind of calligraphy script. The motive here is the same as calligraphy, to create beautiful letters. And the look of letters matters the most here.

And because people are very used to writing cursive, they are able to learn it faster. Therefore it gets invented.

Cursive has become very popular nowadays. And almost every school tells their students to write in cursive. And therefore every student is able to read it properly.

What is the Difference Between Calligraphy And Cursive?

The main difference between calligraphy and cursive is their purpose of writing. The word itself Calligraphy means beautiful writing. And cursive was invented in the 17th century for writing faster. Also there are other differences between them mentioned below.

Calligraphy is mainly used for writing books, bible, religious books (the Quran), novels, etc. It is very time consuming to write and Especially when printing was not invented. It’s become very difficult to mass produce the content for people. So therefore in order to capture or transmit the content/information quickly to the normal people, cursive was invented.

because of cursive writing, it became much more convenient and quicker. So that’s the purpose of cursive. And still in today’s day cursive is used for writing fastly.

On the other hand, calligraphy is mainly used for writing beautifully. It makes letters more attractive and interesting to read. Also religions see it as an honor and respect.

Also calligraphy is a very broad fine art field. And cursive is just a script of writing. It is limited to one script. Calligraphy has way more script than you would ever imagine. There are no limits in calligraphy. You can even make your own calligraphy scripts.

You can either make it on paper or digitally. And also use it as a font. So calligraphy is a very broad art field.

In cursive you can not lift the pen from the paper, it’s one whole joined letter. And in calligraphy you have to pull perfect strokes with the muscle memory.

So you have to lift your pen from paper. Even in cursive calligraphy you can lift the pen and pull strokes with it.

In cursive script, it just looks like cursive writing. But it follows the rules of calligraphy. Following gifs will help you to understand this difference.

The first one is cursive writing. And as you can see in it, it is written in one joint line. It’s not strokes, it’s a continuous line which forms as letters.

In our second example is calligraphy in cursive script. It formed with strokes. Every stroke has to be pulled  perfectly and neatly. And it’s one of the main differences between calligraphy and cursive.

Differences Between Calligraphy and Cursive-

The motive of Calligraphy is to write beautifully. And the motive of cursive  is to write faster. So we can not consider cursive as calligraphy. Their motive and method of writing is very different.

You can see from the example above that while writing cursive we can not lift the pen. It’s one joint letter. And on the other hand calligraphy is created by pulling strokes.

Here is the following example of Letter Construction in cursive calligraphy. You can see in it that the letters are formed by pulling strokes, similar to any other script in calligraphy.

So the cursive script does exist in calligraphy, but it’s a part of calligraphy. And it is done by pulling strokes similar to any other calligraphy script.

Calligraphy is a fine art, it’s a very huge and big art field. On the other hand, cursive is just one script/ writing style.

And our regular cursive is only considered as cursive writing. And can’t be considered calligraphy.